"Knock knock": When they kick at your front door

Last Tuesday, November 19th 2019, at 9 or 10 o'clock at night, when there was a loud knock on the wooden door. From the window of my room, I could take a quick glimpse at the street. A special operations policeman with assault equipment and another dressed in civilian clothes were beckoning me. I had no idea if it was supposed to be a sign to open the door for them, or if they were alerting their team that was stationed at site to act.

My reaction was to get dressed right away, putting on jeans, socks and slippers, being only able to put on one of the latter. Just moments before, I had heard a loud noise. The police had, in fact, opened the door with a single smash. As I was trying to alert my younger sister, wanting to calm her down, my screams couldn't be heard by her.

The two policemen, that I saw just moments before on the street in front of our door, were now entering my room with their heavy weaponry, in a threatening and intimidating manner. "The cell phone, the cell phone, give me the cell phone," shouted one of them at first. Swaying between fear and confusion, I couldn't react. Immediately, the officer who directed the "operation" appeared, insisting in handing them my cell phone. Feeling reduced to virtually nothing, I was hoping for the worst. They started asking me about the supposed existence of weapons. "What weapons?”, I immediately answered.

As I started to look into the eyes of one of them, I noticed that the officer I was looking at was actually just younger than 30 years old, basically still a "kid". I perceived fear and anger, supposing that their training had made them think that they were going to face a “subversive” or a “terrorist”. What kind of image would their supervisors and police generals have molded into their minds?

"Secure the place". The prosecutors immediately made their appearance, making it clear to me that this is a police raid and "nothing more". I started asking for the search warrant, just as six different police raids were taking place that day or would happen in the course of the night and early morning in other parts of the city. The motive seemed to be an "investigation for the crime of rebellion," according to the state. To me, I consider it to be political persecution.

The raid began with the explicit intent to seize all technological equipment. They proceeded to ask me for the passwords to my cell phone and the small laptop I had recently bought; my precious work instrument. They simultaneously started doing the same with my sister's tablet and her cell phone, which was something completely and utterly unnecessary. As I insisted in my demands, they continually stated that this was "standard procedure". While my sister was having a breakdown, sobbing and crying, a prosecutor was asking me to calm her down, as I was thinking to myself: how are we supposed to react when police, armed to their teeth, had just made a violent entry into our most intimate place?

They proceeded to move books, photocopies, and records around. Then, they checked under the bed, between the closets, looking for anything that might be allusive to the assumed claim of "rebellion". They then took a poster, a souvenir of a trade union mobilization which was celebrated in Madrid on May Day in 2016, entitled "Fight for your rights" and a booklet of notes from the Regional Federation of Trade Union Organizations (FRECOOS). They proceeded to find another poster about a kurdish festival held in Hamburg in 2017. As they didn't understand german, and neither do I, they proceeded to take a photo. After that, the policemen raiding my home continued asking me about a serigraph which a friend of mine had just recently given to me. "Always firm" it stated on the poster, the text standing under a fist and a star. "What does this mean?," asked one of the policemen. “It's a work of art”, I answered. They continued by referencing the tidiness of the house, as well as the multiple paintings, which were hanging on the walls, me not being sure if they were admiring them or not.

I was and still am utterly surprised about the "accuracy" and "forcefulness" of the raid. They didn't take any books with them.

They then started recording photo and video material, documenting every step of the raid. I asked if I could do the same, or if my sister could register the proceedings with her cell phone. I had forgotten that her cell phone was just taken in as “evidence”. I just noticed, that I was wrong. We did in fact not have any rights at this moment, the only legitimacy stemming from the State forces.

As we started to go out of the room, they asked me to come with them. We continued by checking all the remaining rooms. Being it a big house, we started to go through every single room, inspecting the kitchen, the bathrooms, the garden, the patio, and even the hen house. I pointed out in laughter that: "There they are, the terrorists you are looking for" making a reference to the chickens.

With the raid under way, my other sister arrived. She appeared with a strong and serious image. It was quite reassuring to me to see her like that, helping to contain our younger sister.

They asked me if I knew a certain individual, me replying affirmatively, thinking that I obviously had and have nothing to hide. We started talking about the National Strike of last October and one of the officers confessed to me he was writing a thesis on the strike. I started sharing a couple of hypotheses, insisting on my professional background: sociology and journalism. I was not sure if the officers were surprised at all to learn that I have higher academic studies and a masters' degree and that I'm considering a doctorate program, as if any of this mattered. I recommended a paper on security and intelligence that I had reviewed in the master's. The officer doing his thesis proceeded to write the author and the title of the paper down, while I was thinking to myself that I had no idea if the text would actually help him at all.

I started addressing the topic of last octobers' strike again, referring to political persecution in particular and the case involving the fire in the General Comptroller's Office. The policemen answered by saying: "how would you explain the same phenomenon happening in Bolivia, Chile and Ecuador? The answer seems to be an obvious one: the continuing rise of neoliberalism and fascism.

We started talking about correísmo. I asked them, if they thought that “hegemony at the polls would be transferable to the streets and vice versa?" - That thesis is correct," replied one of the officers. "Then how is it that a political identity, whose political capital is materialized exclusively at the voting polls, could have organized a National Strike like the one we saw last october? The National Strike exceeded everyone's expectation, between correístas and people which don't support Correa, as well as CONAIE1 and FUT2. In its purest form, this was a process organized by the people. After that, some individuals and movements were open for dialogue, while others were not, resulting only in a partial victory. Suspicion regarding this topic remained between us, as we noticed the fact that we were on different sides, our views on the topic being like water and oil. We were definitely not going to agree regarding that discussion.

At the beginning of the 20th century, the scapegoats were anarchists and communists, which supposedly "ate children and worshiped the devil". In our times, the new scapegoats are, in fact, the correístas. It makes no sense for anyone to "disassociate him or herself" from correísmo in order to escape persecution, ending up by falling back into the dominant discourse and being portrayed and persecuted as the general “suspects". Any way as it may be, at this moment, as a friend of mine was saying just a few days ago: "if you're not a correísta, they make you into one, without any option left to you at all".

Close to midnight, the police were getting ready to leave my home. They concluded by stating that: "it's nothing personal, just part of the procedure", and that "we should talk about these topics in wider depth sometime", as one of the officers was saying in reference to our "academic" discussion. I could only reply with a smile, stating that "hopefully we will never see each other again". We started to laugh for a moment.

After that, I signed the record sheet and they immediately gave me a copy of the search warrant. It turned out they had had a copy all along. Until then, they just had advised me to go to the Public Prosecutor's Office and ask for one. "After a few weeks, in about 30 days, you will be able to go and get your things back," they affirmed. “How will I possibly do that, if they're not even giving me a reference number in the signed document?”. Who could possibly guarantee, that if I was to remember the laptop I had so much affection for, I would actually get it back in the end? That beside the fact that I have no usual attachment to material things.

I showed them to the door and the public prosecutor said goodbye in a maternal tone, admiring the house again, and saying: "this house is perfect for a party", insisting on the tidiness of the house: “you should see mine with two kids in it". I then put myself to her services for any help she may need and even offered her a hen “for a good broth”.

The day ended with me and my sisters trying to process the incidents through our love as siblings. At that moment, I realized then that the only things we have left in the end are ideology, our mutual strength and our own sense in life. 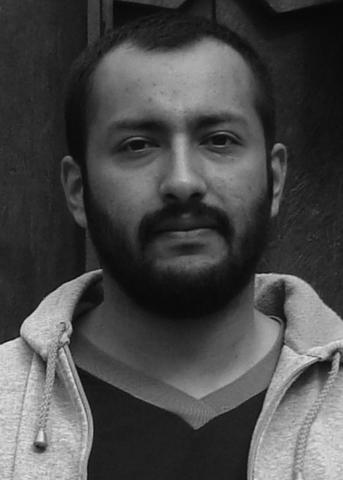